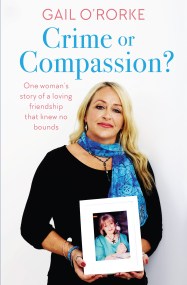 'I was torn. My best friend needed me. But little did I know then what the consequences of helping her would be...' In 2015, Gail…